“Every truly innovative high-tech product starts out as a fad-something with no known market value or purpose but with “great properties” that generate a lot of enthusiasm within an “in crowd. That’s the early market. Then comes a period during which the rest of the world watches to see if anything can be made of this; that is the chasm. If in fact, something does come out of it-if a value proposition is discovered that can predictably be delivered to a targetable set of customers at a reasonable price-then a new mainstream market forms, typically with a rapidity that allows its initial leaders to become very, very successful.

Adoption curves, often called S curves, are one of the more insightful academic tools that actually occur somewhat predictably in reality. I remember learning about them when I worked on internet strategy projects in the late ‘90s. We were trying to figure out the growth curves of different technologies, such as mobile phones, IP telephony, email, online video, and the internet. We were pretty accurate because we leveraged the science behind adoption curves.

What are adoption curves?

As Rogers theorized, an adoption curve is made up of five different segments of adopters, based on their proclivity to adopt new products and technologies. These five segments include the innovators, early adopters, early majority, late majority, and laggards. 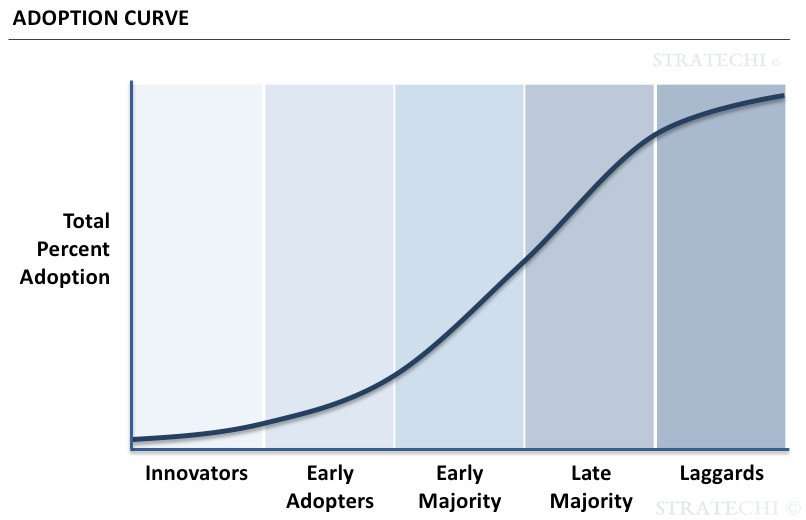 Geoffrey Moore, in his famous book, Crossing the Chasm, gave a major boost to adoption curve thinking, by theorizing that there is typically a major adoption chasm between early adopters and the early majority, and that to “cross the chasm” you need to tailor your product, service, marketing, and efforts to each particular adoption segment.

It’s fun to see the actual adoption curves of many historical technologies below.

How do you incorporate adoption curve thinking into your organization?

With adoption curves, the first step to take is to understand where your products or services are in their category’s adoption curve. Are your products and services in an emerging market, serving innovators, and early adopters? Are they in a high-growth market, riding on the adoption of the majority? Or, are you in a mature market, where the rate of replacement or status quo behavior caps growth?

Once you understand where in the adoption curve your market is, at what percentage adoption will probably tap out at, and whether you are growing faster or slower than the market and the leading competitors, then you have the context you need to apply the following growth strategies related to adoption curves.

In emerging markets, it is critical to gather as much momentum as possible, gathering as many core innovators and creating the brand advocates that will fuel your growth with early adopters and the early majority. Furthermore, in emerging markets, you have to act quickly to lock up distribution, channels, key partners, intellectual property, and other scarce resources. You also have to prepare the organization for the high growth phase of the adoption curve, ensuring that every part of the organization is scalable, and that no bottlenecks will impede riding the wave of growth. 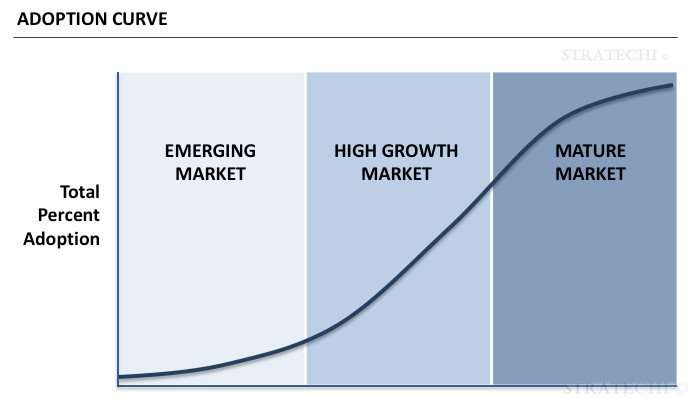 In the high growth phase of an adoption curve, it is all about pressing your advantage and delivering the most incredible customer experience. You see, the largest driving force of high adoption rates is typically word of mouth. There is actually a mathematical equation called the Bass Diffusion Model, which accurately predicts the shape of adoption curves. The equation is below, and let’s not worry about the math, but let’s focus on the importance of two variables: p and q. In the equation, p stands for the coefficient of innovation (e.g., how valuable the innovation is and the strength of distribution, advertising, and other external influencers), while q stands for the coefficient of imitation (e.g., the effect of word of mouth, trials, and the ease of implementation). F(t) represents the installed base fraction, while f(t) represents the rate of change of the installed base fraction. The simple math is the more innovation and value of your product and service combined with how fast you can drive an installed base and word of mouth, the faster the adoption. For further insight into high-growth markets, I encourage you to read Crossing the Chasm.

Most organizations find themselves in mature markets, fiercely battling competitors for every customer. In these situations, innovation is the key to getting onto a high-growth onramp. You have to look every which way you can to innovate. Innovate your core product or service offering to be differentiated in the market, innovate to expand the existing market potential, or find new markets or use cases to apply your product or services to. In the end, some company in a mature market typically figures out how to innovate, create new customer value, and create a new adoption curve to ride a new wave of growth.

The ultimate reinvention of a company is to create a new adoption curve in a mature market. Fast food is a mature market that is in constant reinvention with new mini-adoption curves.  Every year, many new concepts are disrupting the status quo. Chipotle, Panera, Panda Express and so many more have innovated their way to high growth in a slow-growth mature market. One of my favorite innovation stories is Panda Express, which created a cost advantage by using dark meat chicken in the majority of their food when dark meat chicken was substantially less in cost given the 1990s craze and high demand for all-white meat chicken. To hide the dark meat, they simply breaded it and called it Orange Chicken, and voila a growth story for the ages.