“The grand aim of all science is to cover the greatest number of empirical facts by logical deduction from the smallest number of hypotheses or axioms.”

What is deductive and inductive logic?

Deductive logic is referred to as top-down logic, drawing conclusions through the elimination or examination of the disaggregated elements of a situation. Think about the simple example of the profit of a company, which equals revenue minus costs. Let’s say a company’s profit is declining, yet its revenues are increasing. By deduction, their costs must be increasing faster than their revenues, hence shrinking their profits, even though revenues are increasing.

The process of deductive logic is the typical problem solving process for management consulting projects. Once a team creates a hypothesis tree, then the team typically focuses on discovering and analyzing facts to prove or disprove the hypotheses of the tree. And, through proving or disproving hypotheses, the team creates conclusions and recommendations. Deductive logic is used when there is a discrete set of hypotheses or options, such as when trying to find the root cause of a process issue or trying to optimize a discrete system.

A Barrel of Bad Apples

Imagine there is a barrel of 100 apples and 5 apples are picked from the barrel, and they were all rotten. Using inductive logic, the fact that the first 5 apples are rotten can be generalized into a hypothesis that all the apples are rotten. The key with inductive logic is it doesn’t determine factual conclusions, only hypotheses. If all 100 apples were examined then this would be deductive logic. And, if all 100 were rotten, then it could be concluded as fact that all the apples in the barrel are indeed rotten. Though, just picking 5 that are rotten can only create a hypothesis that all 100 are rotten. Inductive logic should be used when there is an open-ended set of options or potential hypotheses, such as trying to figure out the best marketing campaign to drive sales, or potential innovations for a product, where there might be selective facts and observations that point to potential good solutions, but only after being tested can be truly confirmed as fact.

People using inductive logic to derive conclusions is a large and somewhat invisible issue in strategic thinking and problem solving. I often run across situations where someone observes something and then makes a conclusion about the root cause of a discrete problem.

An Example Using Deduction & Induction in Root Cause Analysis 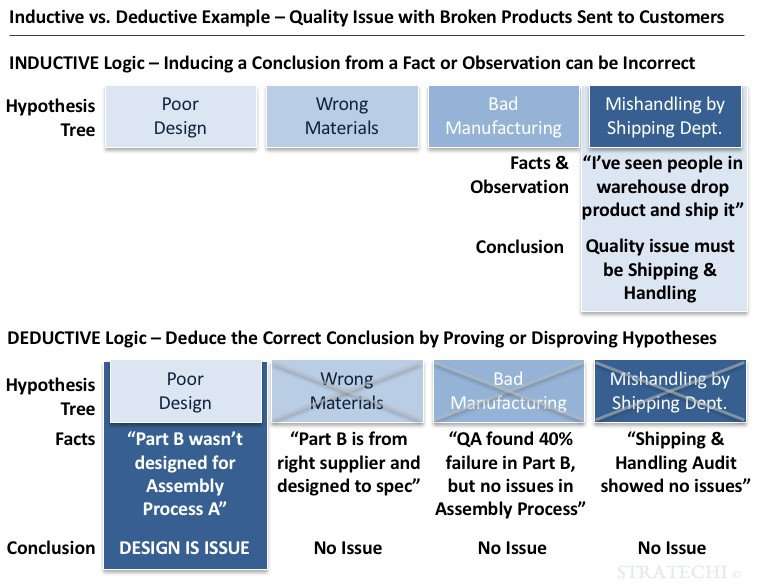 Then the path of deductive logic would lead one to prove or disprove the main hypotheses. To prove or disprove whether it was mishandled by the shipping department an audit could be conducted, which could include inspecting the product before shipping and inspecting the shipping & handling processes. Let’s say the shipping & handling audit showed no issues but did find that 40% of the product had a faulty part, let’s call this part B. Then, we could conduct an audit of the manufacturing and assembly processes. Let’s say during assembly process A, part B broke 40% of the time, even though the manufacturer was consistently following the assembly process instructions. Then, a supplier audit on part B could be conducted to ensure part B is authentic, high quality, and designed to specifications. Let’s say the supplier audit came back with no issues. And, then the product design could be evaluated, and let’s say it was found part B wasn’t properly designed for the assembly process and broke 40% of the time in assembly. By deductive logic, we can conclude that the quality issue was due to the poor design of Part B. Above is a visual representation of the example.

Why is inductive vs. deductive logic important?

EXERCISES TO IMPROVE YOUR DEDUCTION & INDUCTION

One of the core strengths of strategic leaders is the high-quality logic they apply to problems and situations. Regarding inductive and deductive logic, most of the time people use inductive logic. They take a few thoughts or facts and create hypotheses. Typically, what most people need to build up is their deductive logic. That is why we focus on it so much in this problem solving module.

Can you tell when people or even yourself are using deductive vs. inductive logic? Can you determine which logic is needed in which situation? If not, in meetings, when people are recommending a course of action, or are breaking down an argument, see if you can determine if they are using inductive or deductive logic, or no logic at all (gut feelings and emotion). And, then figure out your logic and when best to use deductive vs. inductive arguments.

When you have a significant problem or opportunity you need to solve or build a strategy for, start with a deductive problem solving process. Use the tools in this module, by defining the problem statement, disaggregating the problem, building a hypothesis tree, prove or disprove hypotheses through facts and analysis. And, then switch to inductive logic when creating creative potential solutions and synthesizing those solutions.

NEXT SECTION: THE POWER OF QUESTIONS