“Never interrupt your enemy when he is making a mistake.”

When I was an undergrad at Stanford, I took a class on game theory, and oh man was I lost…way too much math and obscure theory. When I began to work on competitive strategy projects, I began to understand the importance of game theory and how it can apply to many decisions around pricing, marketing, products, and investments.

When a company acts, competitors often react. Thinking through action and reaction dynamics can be very helpful in decision making. Many industries have suffered because the leading players did not think through and understand the repercussions of the natural competitive reactions to decisions. You see this dynamic a lot in price wars, where one player believes that they can take market share by dropping the price when all that often does is force competitors also to drop the price, so they don’t lose market share.

What is game theory?

In game theory, there is the important concept of a payoff matrix, a simple 2×2 matrix outlining the potential options of two competitors and the subsequent payoffs of their decisions. An example of the payoff matrix of the Wild Goose and Butler pricing game is below, with the options of promote and don’t promote, and the subsequent payoffs I just went over. In the parentheses of each box are the potential payoffs, with Wild Goose’s payoffs on the right, and Butler’s payoffs on the left. So, in the top left box, if Wild Goose promotes and Butler doesn’t promote, Wild Goose will make $2 million more, while Butler will lose $1 million. 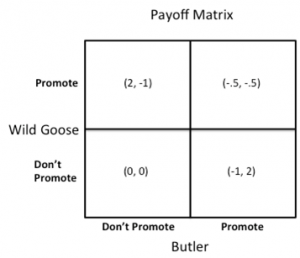 So, let’s get into the game theory of this pricing game. This is where things can get a bit circular in logic. If Wild Goose follows through on their promotion, then Butler should logically react with a promotion to reduce the loss in market share and reduce its profit loss from $1 million to $.5 million, which would also lead Wild Goose to lose $.5 million. Both, Wild Goose and Butler should be thinking through the potential competitive reactions and payoffs to promotions. And, if they were thinking through this game theory, they would both conclude the best mutual thing to do is to both not promote.

Yet, unfortunately, it is rarely the case that two companies would not promote. In fact, if one of them doesn’t promote, the other is highly incentivized to promote to get the gain of $2 million. And, if one of them does promote, then the other is forced to also promote to minimize losses. And, this dilemma, where the mutually beneficial decision for both parties is to not promote, though their incentive is to promote, in both the situation that the other party promotes or doesn’t promote is called the prisoner’s dilemma. And, the likely decision that both parties will promote is called the Nash Equilibrium, created by John Nash. As you can see given this supposedly simple example, game theory can get pretty circular and confusing in its logic. And, if you are lost, no worries, let’s move on to the implications of game theory.

How do you incorporate game theory into your strategic thinking?

While the theory and math of game theory can be difficult to understand, the implications aren’t. Here are the best insights and practices of real-life competitive game theory.

Understand the behavior of your competition

Strategic leaders aren’t typically as super-rational as economists and mathematicians make them out to be in their models. Understanding how competition makes decisions, where they are trying to go, and how they react to situations (e.g., promotions, new products, developments), is so important in trying to understand how they may respond or often, not respond to strategies and decisions.

One of the most pragmatic best practices that have come out of game theory is the idea of tit-for-tat strategy, which is, if you find yourself in the lead and you want to keep that lead, simply follow the moves of your competitor. I was reminded of tit-for-tat strategy when sailing. My friend and I were racing with some other friends. We found ourselves in the lead with a few miles to go, and our competition not far behind. We were both going in the same direction with the same wind, so to keep that lead we simply followed the actions of our competitors. When they turned right, we turned right. When they turned left, we turned left. And, by following exactly what they did, we kept our lead and won the race.

In the event of being hit, hit back harder

This is one of the most critical implications of game theory. Imagine a bully walking up to a bigger kid, hitting them, and trying to take their lunch money.  What is the best reaction? For the bigger kid to hit the bully back harder, where it counts. Then the bully knows not to mess with the bigger kid. It is the same situation in competitive situations. When a competitor gets aggressive with something like a promotion, the best response is to respond to the promotion in force. Otherwise, the competitor typically continues to use promotions to gain market share. This is another form of tit-for-tat strategy. Only by signaling, you will follow their every move, will they potentially stop.

Unfortunately, I worked with a retailer who didn’t hit back when a competitor would open stores really close to their big moneymaking stores. The retailer never retaliated and hit back by opening up stores right next to the competitor’s big money-making stores or dropping massive marketing and promotions. So, the competitor, over the next 10 years, simply continued to open up stores next to the retailer’s big stores, since they never got into a fight.

Be careful what you wish for

The takeaway is when you’re thinking of introducing a game-changing program, make sure competitors can’t easily copy it. On the other hand, if a competitor comes out with a new program, like a loyalty program, from a game theory standpoint, you have to typically match their actions, so they don’t structurally change the competitive landscape in their favor.

While actual collusion by organizations is illegal, there are many things organizations do to announce or signal their intentions to competitors, to try and thwart competitive behavior. The most classic example is announcements of large investments in a market, like “Over the next 3 years, company A will invest $500 million in a new manufacturing plant in Chile.” The typical reason organizations announce these types of investments is to signal to other potential competitors that they shouldn’t think about investing in a particular industry or geography since the expected payouts will probably be low with multiple players.

Unless you have a highly differentiated product, be careful not to start a price war within your market. If you drop the price, typically the only logical option for competitors is to match, or even worse, try to beat your price. And, all of a sudden, you’ll find yourself in a terrible price war, which only shrinks the total profits of the industry. Once a price war starts, they are really hard to stop.

NEXT SECTION: THREE HORIZONS OF GROWTH