THE BIG PICTURE ON GEOGRAPHIC STRATEGY

THE TRUTH - MOST COMPANIES AREN'T READY FOR GEOGRAPHIC EXPANSION

If you aren't winning in one geography, don't think you're going to kill the competition in another geography. According to McKinsey, 4 out of 5 attempts to enter a new market fail. With limited resources, first, focus on creating an unbelievable value proposition and go-to-market strategy. Then use the geographic expansion rocket ship to scale.

A QUICK STORY ABOUT GEOGRAPHIC STRATEGY

Both Walmart and Kmart were launched in 1962. Most people don't know that after 15 years, Kmart was 20 times the size of Walmart. In 1977, Kmart posted $9.9 billion in revenue versus Walmart's $479 million. Kmart's CEO summed it up, "We are a company in a hurry...we are already in 196 of the country’s 261 standard metropolitan districts."

While Kmart focused on geographically expanding at a breakneck pace, Walmart was perfecting its value proposition, go-to-market, and operational efficiencies. After 15 years, Walmart had ~100 stores all within 350 miles of their one distribution center.

Comparing Walmart and Kmart's 1988 financials tells the story (graphic below). Kmart was still much larger than Walmart in total sales but look at the 2X sales per store of Walmart vs. Kmart. Total operating profit is the same but look at the marginal economics. For every $1 of sales, Walmart was generating 50% more operating profit, with 30% less operating expenses. They also spent more on merchandise expenses, which translates to ~10% lower prices for Walmart customers vs. Kmart customers. They had a superior value proposition, go-to-market and financial model. 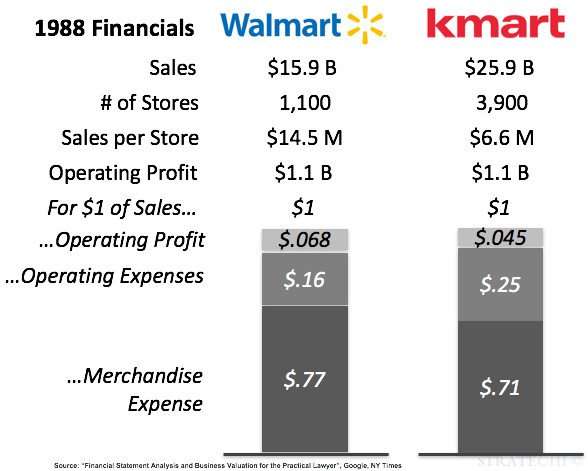 In 1988, while Kmart was in all 50 states, Walmart was in 22 states. Only after Walmart developed a superior business model, did it turn on the geographic expansion lever. Below are the historical revenues of Walmart vs. Kmart. 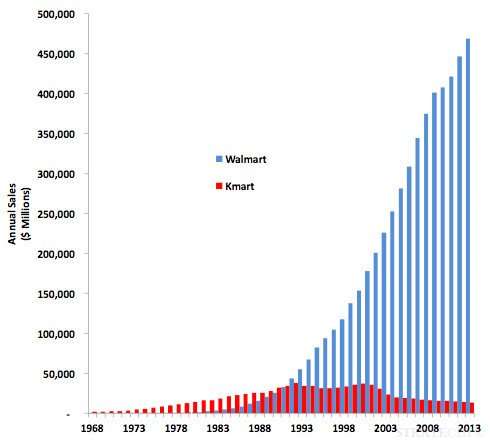 THERE ARE 3 MAIN OPTIONS WITH GEOGRAPHIC STRATEGY

The strategic decision on which way to grow always comes down to opportunity cost, which comes down to the fundamental question, "with limited resources, what strategies and actions will create the most value?" As you think about strategic growth opportunities, think about the big picture. First, focus on the value proposition and go-to-market until you create more customer and financial value than the competition. Once you back those up with robust functional and organizational strategies and execution, then the business has the blueprints for scaling geographically, or in new markets or new customer segments. When it comes to geographic strategy, there are three strategic options; focus (eliminate unsuccessful geographies), densify (grow in existing geographies), and expand (grow in new target geographies). 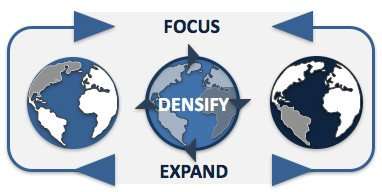 FOCUS
(Too many geos)

THERE ARE TWO MAIN OUTPUTS TO A GEOgraphic EXPANSION STRATEGY

If your company is ready to scale through geographic expansion, then focus on creating two main outputs. The first output is a prioritized list of target geographies and rationale. The second output is the expansion plan that details the goals, budget, and major initiatives needed for the value proposition, go-to-market, and organization to be successful in the new geo(s). 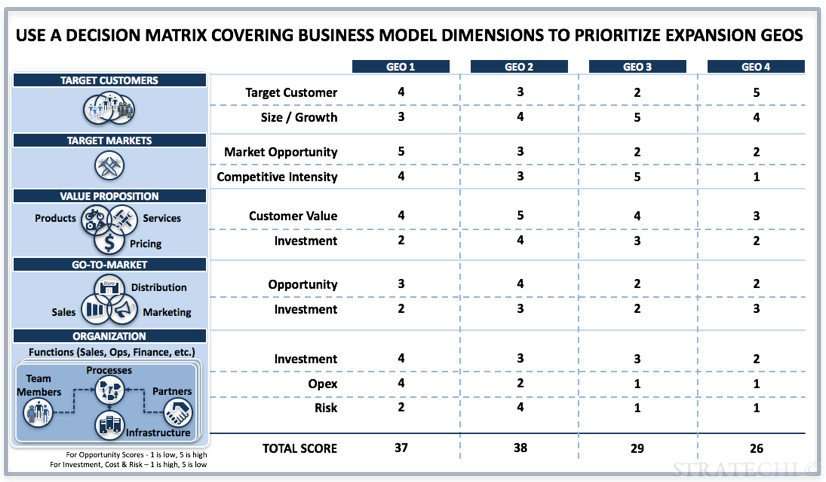 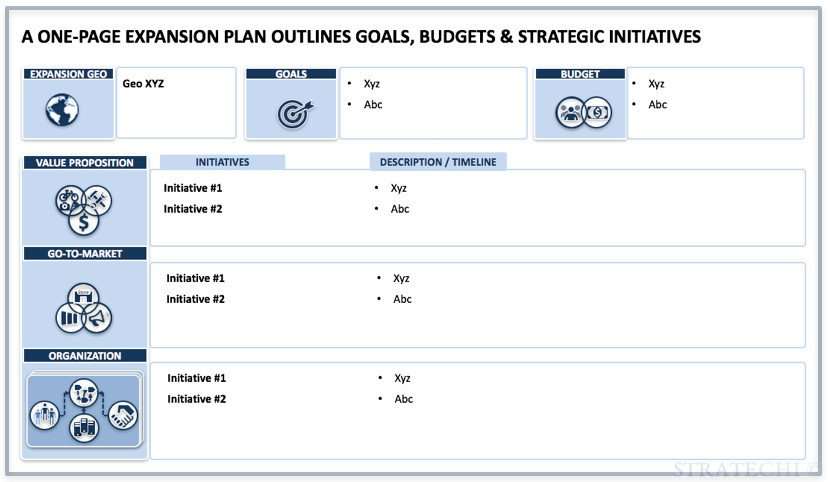 If you want to talk about your geographic strategy with an experienced strategy coach, set up some time with Joe Newsum, a Mckinsey Alum, and the author of this content and website.

There are 4 main steps to creating a geographic expansion strategy

In practice, companies too often approach geographic expansion strategy with less rigor than the potential opportunity and risk warrant. Geographic expansion can quickly take down a company as it siphons off critical resources from existing geographical battlefields to fight new battles, in new geographies, against often new competitors. So, whether you have a team spend a few weeks or months creating a geo expansion strategy, build in the necessary rigor to create a robust strategy to win in the new geographies. The four main steps outlined below will help you ask and answer the right questions to drive that rigor in your project.

The first step of target research and high-level prioritization is necessary to whittle down all of the potential geographies to expand into to the ones that make sense based on customer synergies / opportunity and competitive intensity. 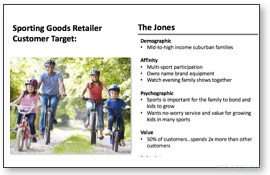 CUSTOMER RESEARCH
What is the size, growth, density, and needs of target customer base in target locations, regions, states, countries? 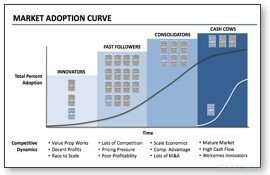 MARKET & COMPETITIVE RESEARCH
What is the market size, maturity, dynamics in the target geos? What are the competitive dynamics and intensity? 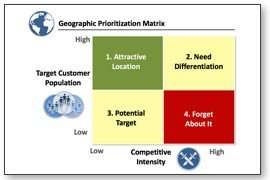 PRIORITIZE INITIAL TARGET GEOS
Out of the potential target geos, what are the priority geos to deep-dive into based on customer & market opportunity?

The goal of the business model research is to assess the competitiveness of your value proposition and go-to-market, and the necessary changes to the business model needed to compete and win against the competition in a new geography. The level of research and analysis often ranges from a quick high-level scan to costly and complex geographic data and analytic models. 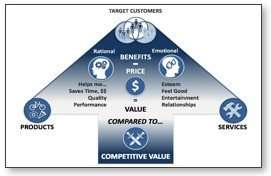 VALUE PROPOSITION ASSESSMENT
In the prioritized geos, how does the value proposition (product, service, pricing) compare to the competition? What changes or improvements are needed to enter and drive better customer value? 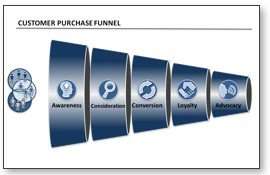 GO-TO-MARKET ASSESSMENT
In the prioritized geos, what are the go-to-market (distribution sales, marketing) dynamics? Are there potential partners go-to-market partners (especially for new countries)? 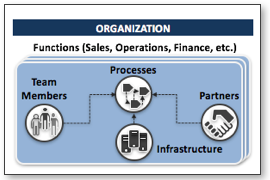 ORG & FUNCTIONAL NEEDS ASSESSMENT
For the prioritized geos, what are the high-level organizational and functional needs, investment, and costs to win? What are the risks?

Step 3 of a geographic expansion strategy is to ultimately decide on the expansion geographies. Follow an objective process utilizing a decision matrix, an insightful fact base, and collaborative deliberation. Decision-makers need to be entirely behind the final prioritized targets.

You solve the size and investment of a geographic expansion strategy within the broader context of the overall business model strategy. A geographic expansion creates opportunity cost by taking potential funding, resources, and time away from investing in other strategies such as targeting new markets, and customer segments, improving the value proposition and go-to-market, and driving the efficiency and effectiveness of the organization and functions. 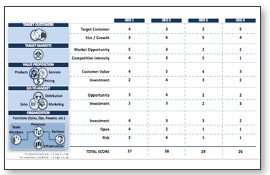 SCORE POTENTIAL TARGET GEOS
What dimensions will be scored? Weighting? Scoring criteria? What are the objective scores for each potential target geo? 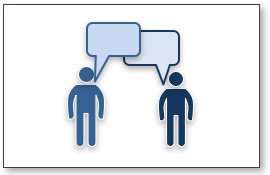 DELIBERATE WHICH GEOS WILL CREATE THE MOST VALUE
What is the governance for deliberating the scores, targets and overall expansion? Who needs to be involved? 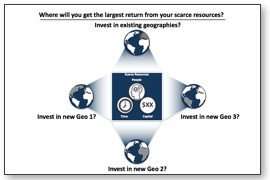 The output of step 3 is a decision matrix utilized to deliberate and decide on the expansion geographies. Below is a good example of a geographic expansion decision matrix, with criteria covering each dimension of a business model. 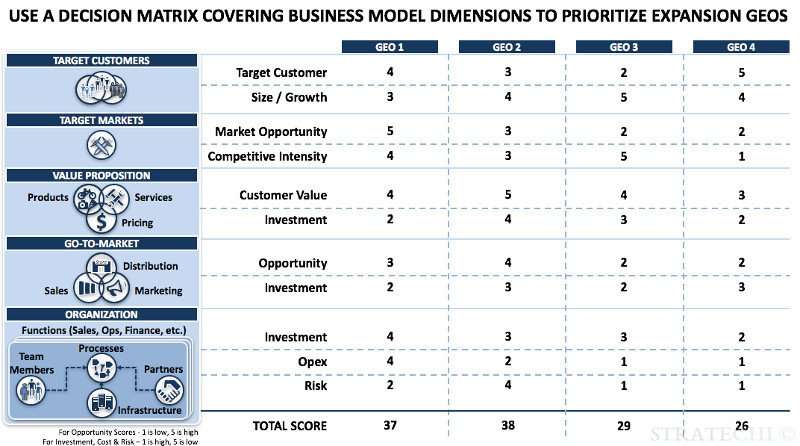 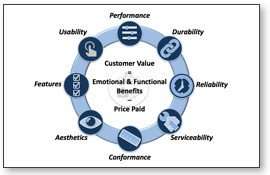 VALUE PROPOSITION IMPROVEMENT PLAN
What changes or improvements need to be made to products, services, and pricing to drive better customer value than competitors in new geo(s)? What is the necessary funding, resources and timing? 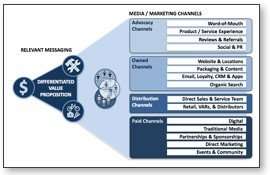 GO-TO-MARKET STRATEGIC PLAN
What are the distribution, sales and marketing strategies and necessary resources to gain target share in the new geos? 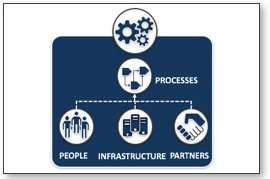 ORGANIZATIONAL & FUNCTIONAL PLAN
What are the organizational, functional, people, process, infrastructure and resource needs of the new geos? Are new partners needed?

You should synthesize the geographic expansion plan should into a one-pager that outlines the goals, budgets, and strategic initiatives necessary to win in a new geography. Of course, there will be supporting analysis and details, but the one-pager is critical to help align leadership, stakeholders, and the organization behind the expansion strategy. 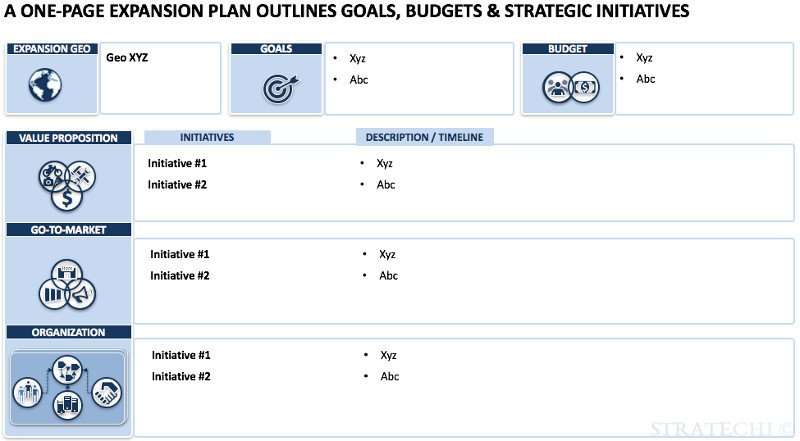 Geographic expansion strategies can scale a company to the next level, but they can also quickly drive a company to financial distress. Before considering geographic expansion, ensure you have the prerequisite of a killer value proposition and go-to-market strategy to beat out the competition in a new geography. As you develop a geographic expansion plan, do it in the broader context of the overall company strategy, since it will siphon off critical resources from other potential value-driving strategies. Moreover, if you decide to expand geographically, allocate enough resources and time to win in the new geographies.

If you want to talk about your geographic strategy with an experienced strategy coach, set up some time with Joe Newsum, a Mckinsey Alum, and the author of this content and website.