“A fact is a simple statement that everyone believes. It is innocent, unless found guilty. A hypothesis is a novel suggestion that no one wants to believe. It is guilty until found effective.”

During my first brainstorming meeting on my first project at McKinsey, this very serious partner, who had a PhD in Physics, looked at me and said, “So, Joe, what are your main hypotheses.” I looked back at him, perplexed, and said, “Ummm, my what?” I was used to people simply asking, “what are your best ideas, opinions, thoughts, etc.” Over time, I began to understand the importance of hypotheses and how it plays an important role in McKinsey’s problem solving of separating ideas and opinions from facts.

What is a Hypothesis?

“Hypothesis” is probably one of the top 5 words used by McKinsey consultants. And, being hypothesis-driven was required to have any success at McKinsey. A hypothesis is an idea or theory, often based on limited data, which is typically the beginning of a thread of further investigation to prove, disprove or improve the hypothesis through facts and empirical data.

The first step in being hypothesis-driven is to focus on the highest potential ideas and theories of how to solve a problem or realize an opportunity.

Let’s go over an example of being hypothesis-driven.

Let’s say you own a website, and you brainstorm ten ideas to improve web traffic, but you don’t have the budget to execute all ten ideas. The first step in being hypothesis-driven is to prioritize the ten ideas based on how much impact you hypothesize they will create. 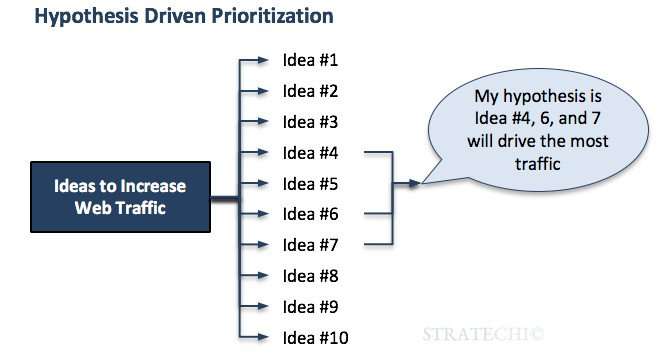 1. An analysis of previous research and the performance of the different ideas
2. A survey where customers rank order the ideas
3. An actual test of the ten ideas to create a fact base on click-through rates and cost

While there are many other ways to validate the hypothesis on your prioritization, I find most people do not take this critical step in validating a hypothesis. Instead, they apply bad logic to many important decisions. An idea pops into their head, and then somehow it just becomes a fact.

One of my favorite lousy logic moments was a CEO who stated,

“I’ve never heard our customers talk about price, so the price doesn’t matter with our products, and I’ve decided we’re going to raise prices.”

Luckily, his management team was able to do a survey to dig deeper into the hypothesis that customers weren’t price-sensitive. Well, of course, they were and through the survey, they built a fantastic fact base that proved and disproved many other important hypotheses.

Why is being hypothesis-driven so important?

Imagine if medicine never actually used the scientific method. We would probably still be living in a world of lobotomies and bleeding people. Many organizations are still stuck in the dark ages, having built a house of cards on opinions disguised as facts, because they don’t prove or disprove their hypotheses. Decisions made on top of decisions, made on top of opinions, steer organizations clear of reality and the facts necessary to objectively evolve their strategic understanding and knowledge. I’ve seen too many leadership teams led solely by gut and opinion. The problem with intuition and gut is if you don’t ever prove or disprove if your gut is right or wrong, you’re never going to improve your intuition. There is a reason why being hypothesis-driven is the cornerstone of problem solving at McKinsey and every other top strategy consulting firm.

How do you become hypothesis-driven?

Most people are idea-driven, and constantly have hypotheses on how the world works and what they or their organization should do to improve. Though, there is often a fatal flaw in that many people turn their hypotheses into false facts, without actually finding or creating the facts to prove or disprove their hypotheses. These people aren’t hypothesis-driven; they are gut-driven.

The conversation typically goes something like “doing this discount promotion will increase our profits” or “our customers need to have this feature” or “morale is in the toilet because we don’t pay well, so we need to increase pay.” These should all be hypotheses that need the appropriate fact base, but instead, they become false facts, often leading to unintended results and consequences. In each of these cases, to become hypothesis-driven necessitates a different framing.

• Instead of “our customers need to have this feature,” ask the question, “what features would our customers value most?” And, then conduct a simple survey having customers rank order the features based on value to them.

• Instead of “morale is in the toilet because we don’t pay well, so we need to increase pay,” conduct a survey asking, “what is the level of morale?” what are potential issues affecting morale?” and what are the best ideas to improve morale?”

Beyond, watching out for just following your gut, here are some of the other best practices in being hypothesis-driven:

Listen to Your Intuition

Your mind has taken the collision of your experiences and everything you’ve learned over the years to create your intuition, which are those ideas that pop into your head and those hunches that come from your gut. Your intuition is your wellspring of hypotheses. So listen to your intuition, build hypotheses from it, and then prove or disprove those hypotheses, which will, in turn, improve your intuition. Intuition without feedback will over time typically evolve into poor intuition, which leads to poor judgment, thinking, and decisions.

I’m always curious about cause and effect. At Sports Authority, I had a hypothesis that customers that received service and assistance as they shopped, were worth more than customers who didn’t receive assistance from an associate. We figured out how to prove or disprove this hypothesis by tying surveys to transactional data of customers, and we found the hypothesis was true, which led us to a broad initiative around improving service. The key is you have to be always curious about what you think does or will drive value, create hypotheses and then prove or disprove those hypotheses.

You need to validate and prove or disprove hypotheses. Don’t just chalk up an idea as fact. In most cases, you’re going to have to create a fact base utilizing logic, observation, testing (see the section on Experimentation), surveys, and analysis.

Be a Learning Organization

The foundation of learning organizations is the testing of and learning from hypotheses. I remember my first strategy internship at Mercer Management Consulting when I spent a good part of the summer combing through the results, findings, and insights of thousands of experiments that a banking client had conducted. It was fascinating to see the vastness and depth of their collective knowledge base. And, in today’s world of knowledge portals, it is so easy to disseminate, learn from, and build upon the knowledge created by companies.