THE BIG PICTURE ON PRICING STRATEGY

1. Price is one component of the value equation

To a customer, value equals the rational and emotional benefits of the products and services minus the price.

In every industry, a myriad of pricing models are utilized, but typically one wins out.

2. Drive value for customers to be a price maker

To be a price maker vs. a price taker, drive more value for customers vs. the competition.

Pricing strategy is ever evolving with competitive dynamics and pricing experiments.

Optimizing the pricing of a product or service can be a tricky proposition. Pricing involves understanding competitive dynamics, variable and fixed costs, customer psychology and perception, brand value, demand curves, impact on profitability, and a heavy dose of common sense.

In pricing, there is always a lot on the line, since pricing determines the demand and profitability of an organization’s products and services. Correctly optimizing pricing can also be one of the easiest and quickest ways to increase profitability. Some simple math always drives this point home. If a company has 10% net profit margins, then raising prices by just 1% can drive a 10% increase in net profit.

Companies that ultimately win drive better customer value than competitors. Customer value equals the customer benefits derived from products and services minus the price. What complicates matters is that customers compare value between competitors. So, you have to think about pricing taking into account the context of the entire value proposition and competitive dynamics. 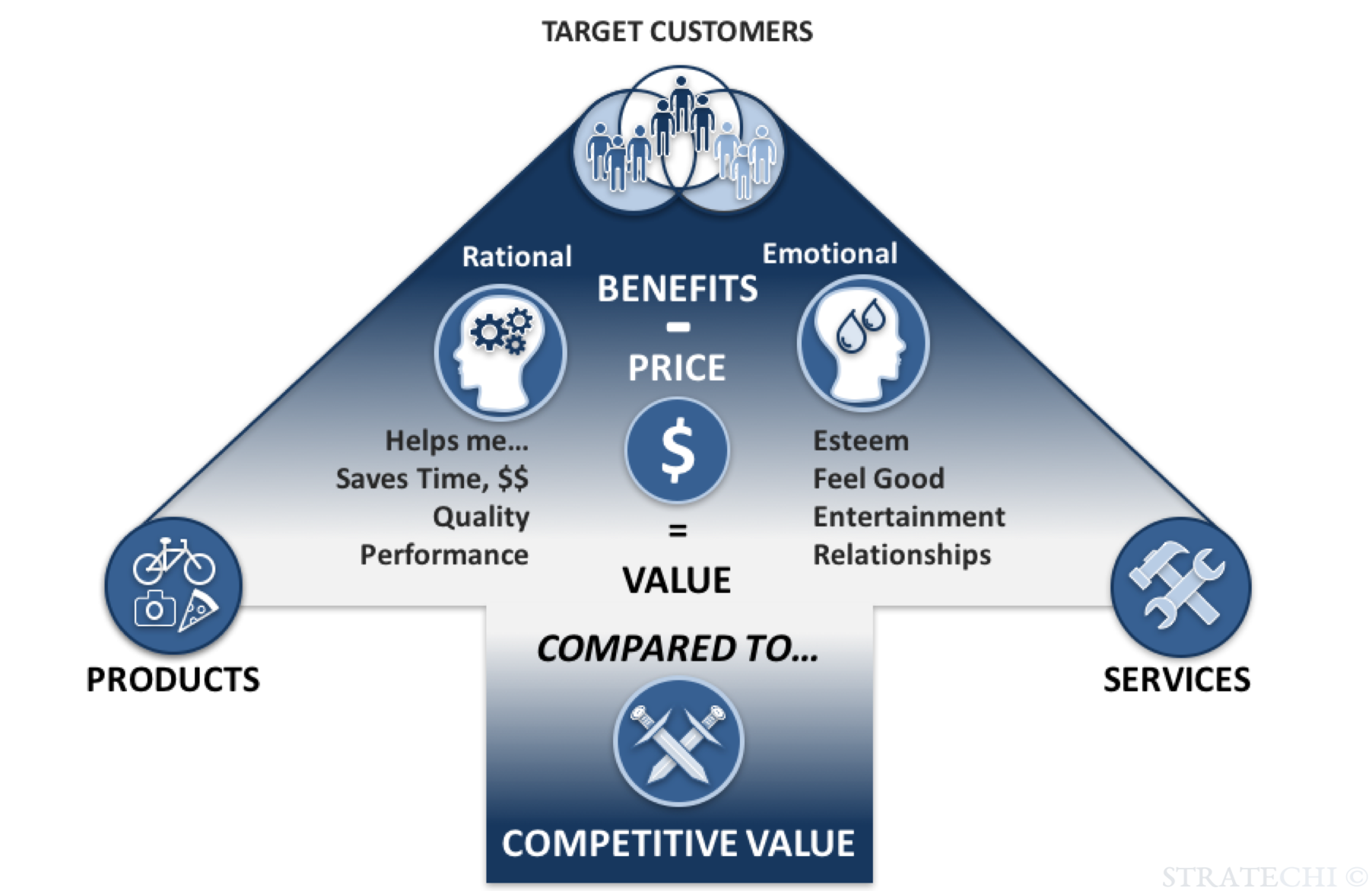 There is a broad spectrum of pricing power. On the lower side, you have commodity markets, where companies are price takers, having to price their products & services at or below the market price. The winners in these markets are typically the low-cost providers. On the other side of the spectrum are markets and value propositions that are highly differentiated, where there are companies that are the price makers since they drive superior customer value over the competition. Even in commodity markets, there are always companies trying to become price makers by improving the customer value wedge, especially on the benefits side. 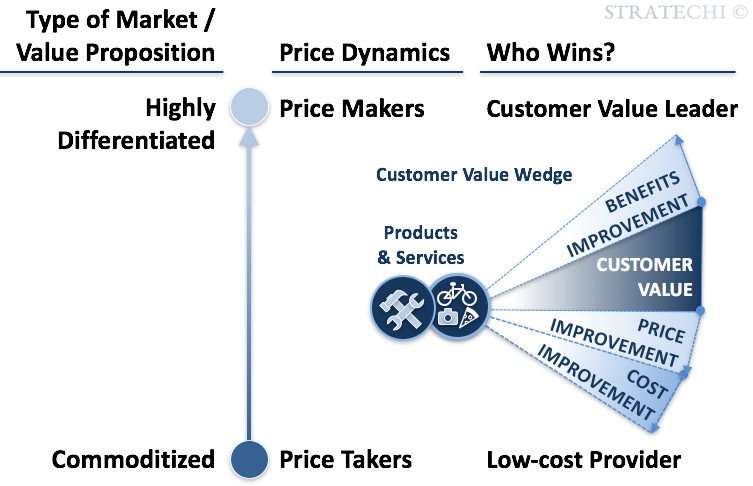 There are many different pricing models across a spectrum of free to monopolistic. Where does your company land on the pricing spectrum? 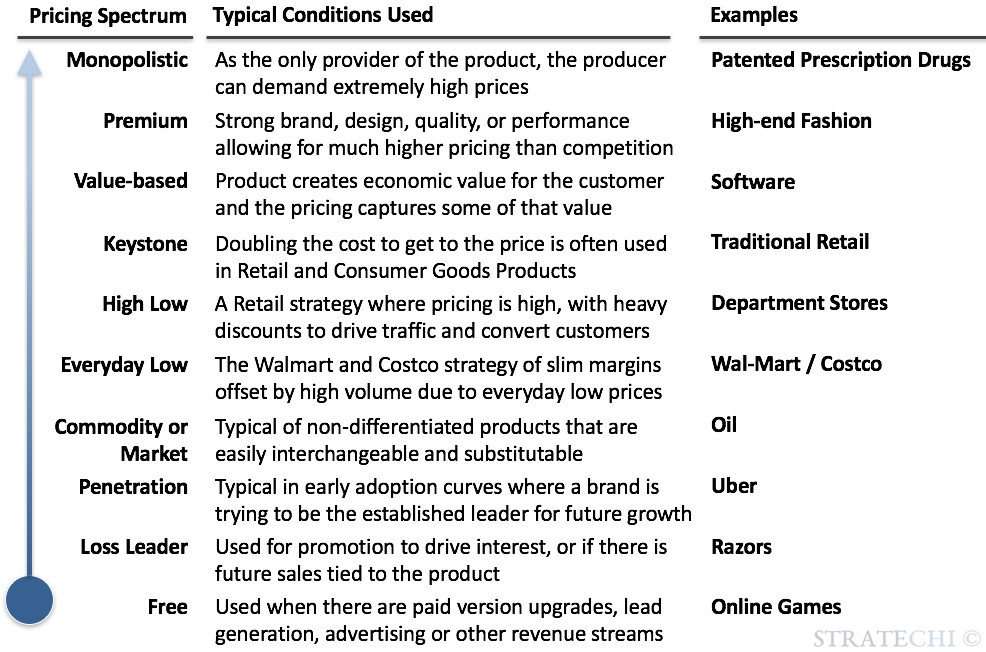 Let’s use the example of a pizza maker, with a tiny little store in New York City. Let’s say it costs the pizza maker $5 in ingredients to make each pizza (really good ingredients!). If he charged a premium of $20 per pizza, he would sell 500 a month. If he charged $12.50 per pizza, he would sell 1500 a month. If he doubled his cost and charged $10 per pizza, which is called keystone pricing, he would sell 1800 a month. Let’s say he was opening up a new pizzeria, and to get as many people to try his pizza before the opening, he was going to charge $4 per pizza to sell 4000 per month. We can plot all of those prices and demand quantities on a graph to create a demand curve, and we can plot the variable cost ($5 per pizza) on the same graph.

The second graph plots the pizza maker’s gross profit (revenue minus variable costs) at different prices and demand quantities. At the premium price of $20, he’ll make $7500.  The $12.50 pizza is the profit maximizing price, which generates $11,250 in profit. At the keystone price, he’ll make $9000. And, the $4 pizzas will translate to a loss of $4,000. On this second graph, you can also map the fixed costs (e.g., rent, electricity, overhead) to calculate total or net profit.

Ok, that was some seriously dense material. While many people think of demand curves as being theoretical, they are real and important. While it isn’t practical to try and figure out every single point necessary to create a smooth demand curve, it is relatively easy to do some pricing experimentation or surveys to plot a few points on the chart, which is typically all you need to figure out the price demand dynamics of a product. In pricing strategy, it is insightful to answer simple questions such as “What roughly happens to demand if the product is 10% cheaper, 25% cheaper, 10% more expensive, or 50% more expensive?” There could be a lot of money in those answers. 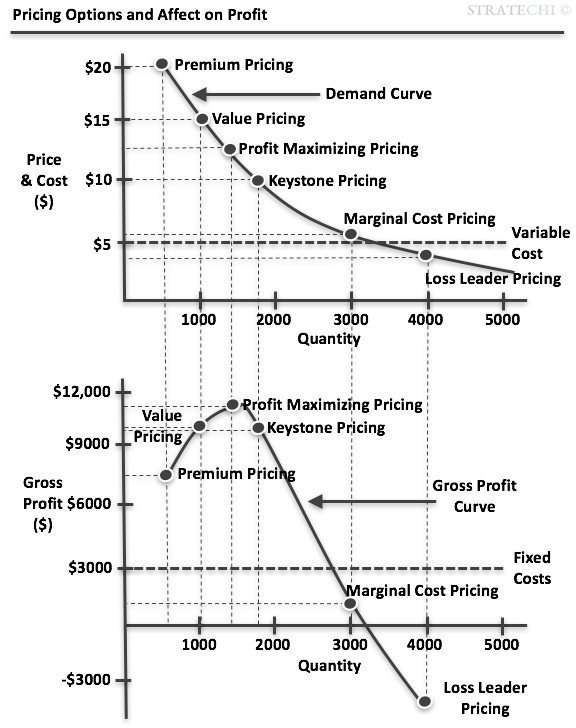 Over the past 20 years, subscription pricing models have emerged as an innovation across almost every industry. You can get almost anything with a monthly subscription, from massages to beers of the world.

From a business model perspective, if you can crack the code of subscription pricing, you can even out a predictable revenue and cash flow stream. The graphic goes over the typical subscription pricing strategy and the cumulative profit over a 12 month period. 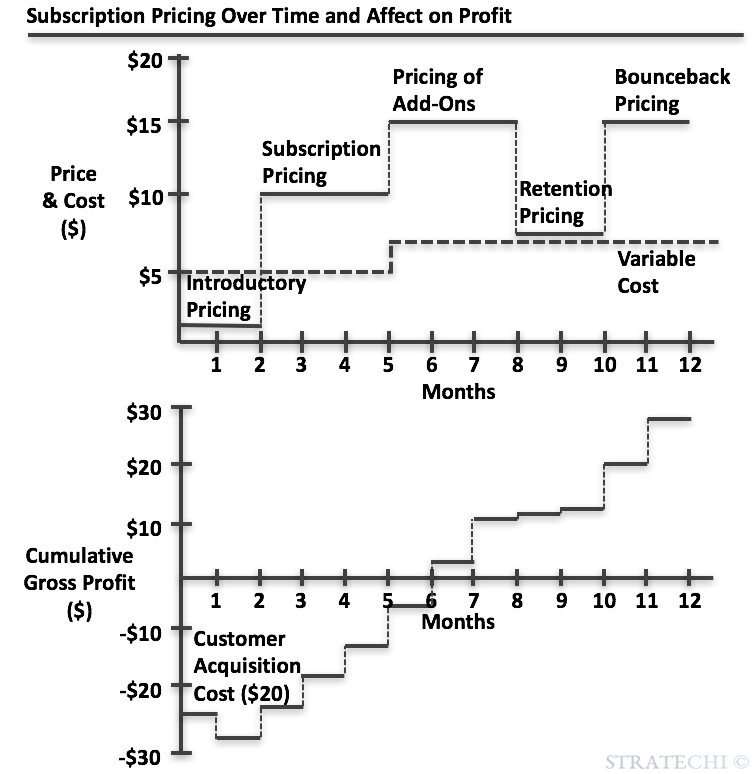 Typically, when it comes to pricing, companies are trying to figure out whether to raise, lower, or keep the same pricing. Let's go over some of the thought process for each option.

Raising price seems like the easiest way to drive margin and profit, and many management teams often raise prices to meet their short-term bonus targets. Though over the long term, many customers catch on to the increasing price game, and over time decide to spend their money someplace else. Struggling companies often follow the same playbook of chasing revenue growth by increasing prices, instead of fixing the customer value proposition. They may help themselves in the very short term, but they ultimately end up accelerating their demise.

There are certain situations when you should raise prices. If a product or service has a step function improvement in customer benefits, then the right move could be to raise prices and split some that value creation with the customer. You need to take into account competitive dynamics, especially how replicable the step-function improvement is by the competition. If a product or service is a premium brand targeted towards wealthy customers, then raising the price could signal a sign of quality and cachet.

90% of the time, companies decide to keep the price of a product or service. If the price stays the same, the key is to continue to drive better customer value than the competition, which will translate into market share and volume gains. Companies that stay the course on pricing need to focus on improving the benefits and competitive differentiation of the products and services to strengthen demand and profitability.

Most struggling companies need to improve their customer value equation. And, while they need to improve the benefits of their customer value proposition, they may need to also lower to drive demand. There are two important strategic takeaways when reducing prices. First, work on lowering the variable and fixed cost structure of the business model before lowering prices. A business needs to have a financial model that supports lower pricing. Second, be careful not to start a price war.

From a competitive game theory perspective, lower pricing by one company is typically met with lower pricing from competitors. If you do lower pricing, make sure you have a structural cost advantage. There are many examples where price wars reduced the entire profit pool in markets where it is historically challenging to differentiate the value proposition, such as in the memory chip and air travel markets.

Of course, if you want the best of all worlds, figure out a three-tier pricing model, with a base, standard and premium version. Most products and services have three tiers because it drives volume and profit. 3-tier pricing gives customers choice, which customers love when trying to make a decision. 3-tier pricing also drives incremental demand by attracting different customer segments with various price sensitivities.

The key to 3-tier pricing is to optimize the features and benefits of the three tiers in a way to shape the demand for the three value propositions and ultimately maximize profitability. You can use conjoint analysis to help optimize the feature sets and pricing of the three tiers, while also informing the potential demand curves. 3-tier pricing is one of the easiest ways to grow sales. 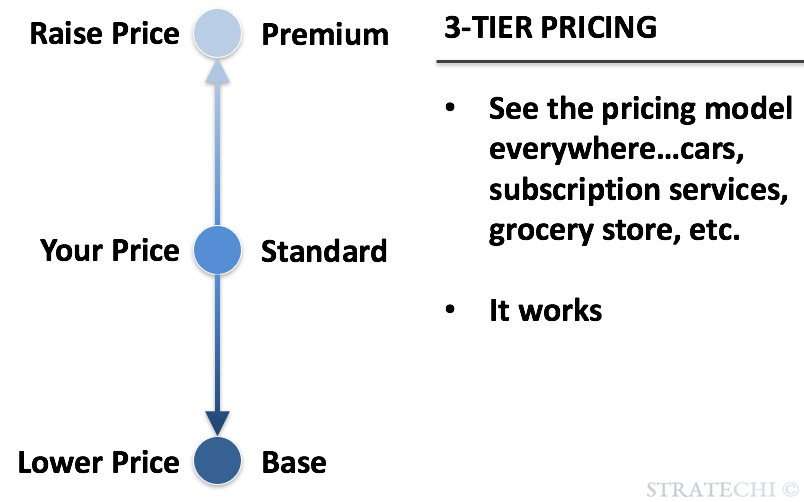 For struggling companies, one of the first things to examine is their pricing history. You'll often find historical pricing increases to offset diminishing demand. Those price increases often lead to a vicious cycle of a decrease in the overall customer value proposition, which leads to a reduction in demand, which leads to more price increases. In these situations, you have to break the vicious cycle by rearchitecting the features and benefits of the products and services and the cost structure of the products, services and overall company. Then figure out the right competitive pricing strategy. The takeaway is if you are thinking about raising prices to mask declining demand, first focus creating killer products and services.