“The whole is greater than the sum of its parts.”

I’m going to save you the time and money of sitting through a ten-week MBA course on mergers & acquisitions (sorry Professor Thorburn). Mergers & acquisitions, partnerships, and consolidations are primarily about by the value created from the synergies between two or more entities. Synergy is when 1 + 1 is greater than 2.

When two different entities bring together disparate, but complementary assets, they often create synergies. There are many examples of small technology companies being acquired or partnering with large companies that plug the technology into the larger companies broad solution set, distribution network, and marketing engine, realizing a substantial growth in revenues of the technology itself, and revenues of other solutions influenced by having the technology as part of the solution.

Or, the flip side happens when a large company acquires a small company with established distribution and presence in an emerging market. The large company can leverage the small company’s established distribution and presence in the emerging market. Two market leaders that merge can also create revenue synergy by restricting supply and increasing prices.

Cost synergies are generally created by combining two or more entities and eliminating redundancies, improving scale efficiency and increasing negotiating leverage over suppliers and partners. The elimination of cost redundancies can relate to processes, personnel, maintenance and operation of capital, distribution, and marketing. Combining the best practices of the different entities and driving more volume through processes create scale efficiencies. Combining the purchasing power of two or more entities, and the transparency of actual costs and prices paid by the different entities drives negotiating leverage over suppliers and partners.

Other financial synergies can be created primarily through pooling together assets to create a larger borrowing capacity, tax advantages of increasing debt and deducting the interest payments from earnings and by combining the value of deferred tax assets to offset the potential taxes generated by the future profit of combined entities.

Below is a nice visual logic tree that outlines the various sources of synergy, which you can use to better evaluate potential options. 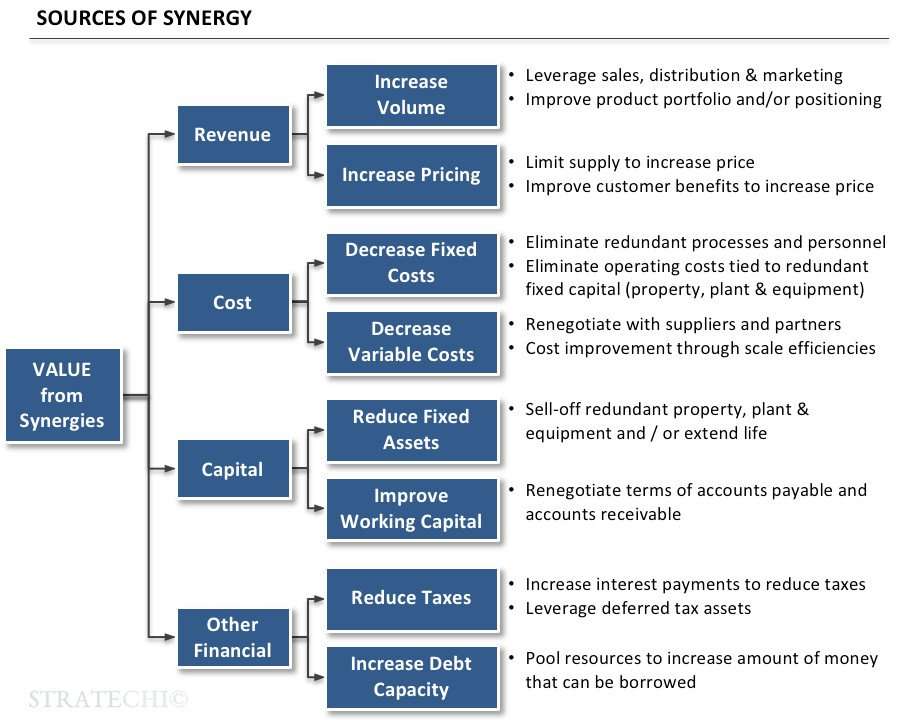 How do you conduct Synergy Analysis?

As you evaluate potential investments, partnerships, and consolidations of teams or groups, you need to think through and analyze the potential revenue, cost, capital and other financial synergies of combining entities. Here are some of the best practices in evaluating synergies and realizing their value.

Use the Sources of Synergy to Brainstorm

The logic tree, on the previous page, can serve as a great starting point to brainstorm some potential synergies between two or more entities. As you brainstorm, also evaluate, at a high level or level of magnitude, the potential value, and difficulty in realizing the synergy.

Look for Clean and Easy Synergies

Complexity is one of the largest hurdles in harvesting synergies from mergers & acquisitions, partnerships, and consolidations. It is one thing to say there are cost synergies due to redundant processes and systems, yet realizing those cost synergies can be an absolute nightmare. To map potentially thousands of different processes, integrate all of the related databases and systems, and implement consolidated processes and systems and train all of the stakeholders, while a financial bonanza for consultants, can negate a large portion of any potential cost synergies. Complexity can take down any potential synergy. You want to look for true plug and play and scalable situations, without the need for customization, investment into new capabilities, or large increases in operating costs.

There is a reason why a lot of partnerships, mergers & acquisitions fail. Beyond the complexity that often get in the way of realizing synergies, there are often difficulties in realizing revenue synergies. As you assess revenue synergies, it is critical to look at the synergies from the view of a customer. Are the products or services complementary? How are the combined products and services going to be branded? Will it be simple for the customer to understand, purchase, and service? As you think about revenue synergies, you have to think through if it makes sense from a customer perspective. And, to understand the potential fit and value, you can always conduct focus groups and surveys to understand the customer perspective on potential synergies.

Be Conservative in Calculations

It is important to be conservative once you start calculating and estimating potential value generated from synergies. While the magnitude of the synergies is what often provides the sizzle for combining two entities, the magnitude often fizzles in trying to harvest the synergies. Don’t use the best case (e.g., eliminating all the fixed costs of an acquisition) as the base case in calculating values. It is typically best practice to shave off 20-40% of the potential synergies to arrive at a probably base case.

I’ve executed a lot of partnerships, and the first thing both parties need to understand, articulate and be transparent about clearly are the motivations of each party in developing a partnership. If the motivations aren’t aligned, the partnership is destined to fail. I’ve seen a lot of potential partnerships formed under pretenses and unethical motivations, and just like a relationship, if there isn’t a foundation of trust and respect, it will never work out in the long term.

Realize the Cost and Capital Synergies

Mergers & acquisitions and consolidations of teams, groups and business units are often formed under the pretense of potential value creation from cost and capital synergies, only never to realize those synergies. Cost synergies, related to redundant personnel, are especially difficult to realize since they necessitate laying off or repurposing personnel for different roles. Furthermore, as stated before, the complexity of combining and integrating processes and systems can be overwhelming. One of the best practices in realizing cost synergies is to eliminate one of the entities’ processes and systems, and port over the least amount of critical data to the new systems.

To get you going on understanding the full breadth of synergies for a new project, product, service M&A, consolidation, download the free Synergy PowerPoint Worksheet. 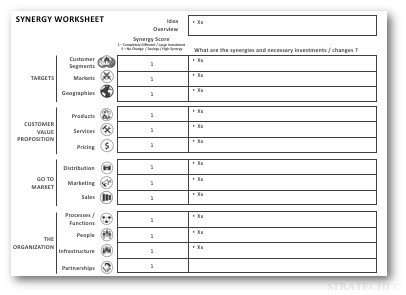