“The greatest good you can do another is not just share your riches, but to reveal him his own.”

While I was at McKinsey, I was having trouble managing a new, very smart analyst fresh out of undergrad. A partner on the project took me aside and said, “Let me teach you about the will skill matrix.”

He whipped out a marker and drew a simple two by two with “will” on the vertical axis and “skill” on the horizontal, and labeled each axis low to high. He then said, “Ok, the analyst you’re having issues with is in this box, high skill but low will. He will poison this team if you don’t do anything. When others start seeing somebody not engaged, they become disengaged. The best thing to do is have a stern talk with him about his will on this project.”

Take a look at the will skill matrix visual below. That day, I sat down with the analyst for a heart-to-heart conversation. I mimicked the partner and drew the will skill matrix on a whiteboard. I laid it out for him, “You are so talented and important to this team, but it just doesn’t seem like your heart is in this project…what gives?”

He took a moment and then responded, “My girlfriend just broke up with me at the beginning of this project, and it’s been rough for me.”

All of a sudden I understood his perspective and issues, it wasn’t me or the project that was impacting his will, it was something very personal to him. We talked for a few hours about relationships, life, and ultimately that he needed to put his energy into this project. He needed the talk, and we needed him engaged, and after the conversation, he gave 110% on that project.

What is the will skill matrix?

The will skill matrix is a simple framework to help assess and determine the appropriate course of action for team members. It measures their relative will and skill for a particular job or role. You define will as a team member’s desire, purposefulness, and determination in accomplishing their accountabilities. You define skill as their talent and ability to perform their accountabilities. Given a team member’s will and skill they can be segmented as a:

Higher will and higher skill. High performers are typically role model team members who can be delegated more responsibilities and fully empowered. They should also mentor and train others.

Higher will and lower skill. Contributors are often good-natured team member who needs more training, mentoring and tools to improve their skills. They can typically be empowered for some accountabilities while necessitating more hands-on management for other accountabilities.

Lower will and lower skill. Low performers are typically in over their heads in their current role and have a negative attitude towards their role and often the organization. They need to quickly improve their will and/or skill; otherwise, they should typically exit the organization. Low performers need to be highly directed on many of their accountabilities until their will or skill improves. This is the one case where micromanagement may be necessary. 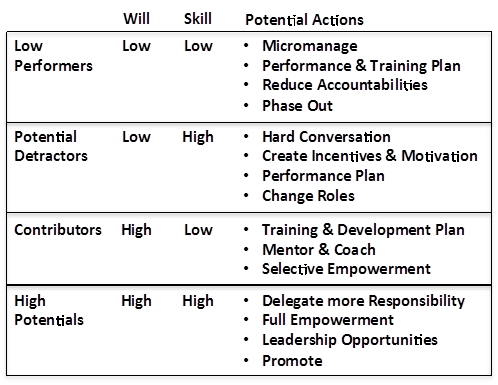 To get you going on assessing somebody’s will and skill, download the free and editable Will Skill Assessment Worksheet. 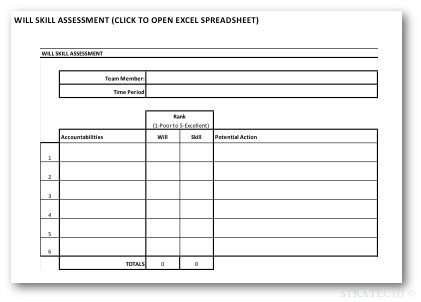