The 7 Habits of Highly Effective People

“I refuse to accept the idea that man can not influence the unfolding events that surround him.”

Stephen Covey is force to be reckoned with. His book, The 7 Habits of Highly Effective People has sold over 25 million copies, changing the lives of millions. The 7 Habits enable a personal journey from the shackles of dependency to the empowerment of independence to the abundance of interdependence. As Stephen states, 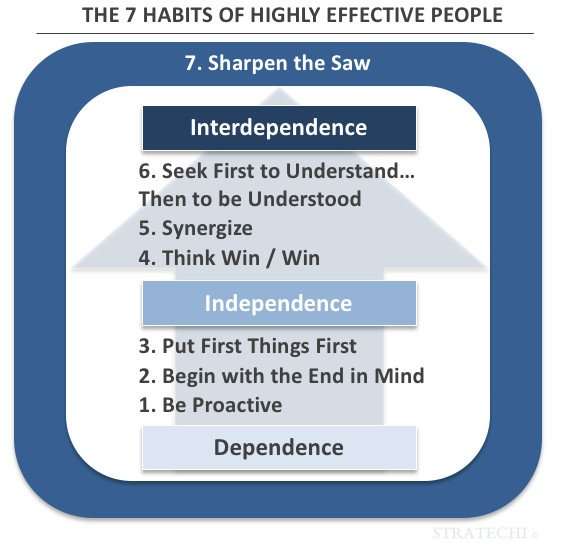 Growing from dependence to independence

Dependent people need others. They need them for direction, to validate them, and give them emotional worth. They also need others to blame for their situation and issues. They often play the victim. Habits 1, 2, and 3, which are “Be Proactive”, “Begin with the End in Mind”, and “Put First Things First”, help people with self-mastery. The first three habits can kick-start your brain to accelerate out of the doldrums of blame and complacency to the blue sky of self-actualization.

To get healthy, go workout, eat right, and take care of yourself better. To get promoted, start proactively taking on more responsibility and doing those things expected of the next position. Stephen states proactive people can be “5000-plus percent” more effective than those that are reactive. I tend to agree with him because proactive people create their own energy and path to progress, while reactive people are continually waiting or worrying about what to do next, often paralyzed by their inaction.

Being proactive is taking that first step of the rest of your life. It is also challenging because you have to release the historical baggage of telling yourself why you can’t succeed, why you aren’t good enough, and why you’ve failed in the past. Stephen calls this necessary paradigm shift inside-out, starting first with yourself.

Habit 2: Begin with the End in Mind

Begin with the end in mind is about visualizing where are you trying to lead yourself and why? What do you value? What are your goals? If you don’t know where you are trying to go, then are you just running in place? It is akin to strategy. If you don’t know what the goal is, how are you going to develop a strategic path of action to achieve that goal?

To begin with the end in mind, Stephen encourages people to write their personal mission statement, grounded on what is meaningful in the various aspects of their life. My personal mission statement is to “Live a balanced life while making strategy accessible to the masses to help people realize the potential within themselves and their organizations.” It is crucial for me to balance my time, energy, and focus between family, health, friends, interests, and work. If I’m balanced, I’m pretty happy. In my professional life, I’m energized by simplifying strategic concepts and tools and helping people realize the potential in themselves.

Once you understand your mission statement, then you can start visualizing your long-term and short-term goals and creating your strategies to achieve your goals. While habit 1 is about changing your paradigm from reactionary to proactive, habit 2 is about using your imagination, consciousness, and values to visualize the destiny you desire, and the potential within you.

Put first things first is all about prioritizing and executing those actions and activities that will enable you to realize your mission and goal. It is about self-actualization. As Stephen says, “The key is not to prioritize your schedule but to schedule your priorities.”

To help with put first things first, Stephen has introduced the Time Management Matrix, which is a helpful way to frame the things people spend their time on and is outlined below. 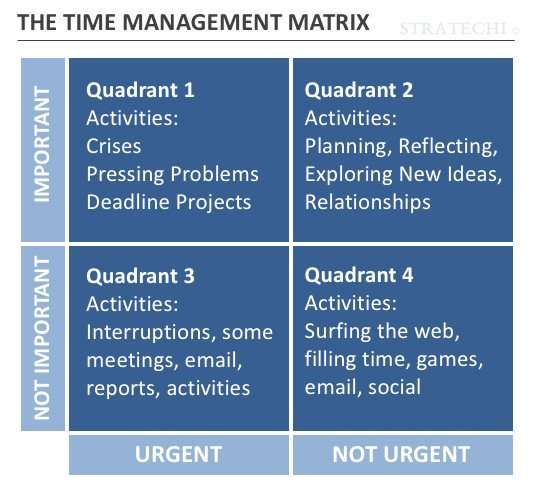 The key to being highly effective is expanding the amount of time you spend on quadrant 2, which is about important but not urgent activities, such as planning, exploring new ideas, reflecting, and nurturing relationships. These are often the activities that get crowded out by the urgency of other things.

Every time I get into a new leadership situation, I am obsessive about utilizing my time to drive value. I prioritize my own agenda instead of succumbing to the onslaught of meeting and project invitations that often land people in quadrant 3 and 4. Setting your own and your team’s agenda is essential. Also, strategic leaders need to delegate quadrant 1 activities and empower others to spend more time in quadrant 2.

Growing from independence to interdependence

Whereas a win/lose mentality is about you winning and someone else losing, a win/win mentality is about seeking mutual benefit in a relationship. Think about a weak relationship between a manager and a team member. Let’s imagine the manager is a micromanager that focuses on win/lose. He focuses on his wins, next promotion, and the paycheck while thinking management is about cracking the whip and fear into his team. This is a win/lose mentality. The team probably doesn’t give much, and in the end, it usually turns into a lose/lose situation. A manager with a win/win mentality focuses on how he can better his team members, give them opportunities to grow, coach them, expand their accountabilities, provide them training and mentorship, and fuel their passion. If his team grows and wins, he will also grow and win.

A win/win mentality necessitates the right mindset, principles, and behaviors. The win/win mindset is about abundance. The idea that there is so much goodness in the world, and it isn’t about getting a bigger piece of the pie, but fundamentally growing the pie larger. Win/win is about integrity, character, togetherness, and building trust by following through on commitments.

Habit 5: Seek First to Understand, Then to Be Understood

Habit 5 sounds so simple, yet it is often the most difficult. We are human, we have egos, and we want to be heard. We let our own thoughts and words get ahead of our ears. Seek first to understand is not just about listening to someone’s perspective, but truly empathizing with them, taking yourself out of the equation and seeing the world from their eyes, understanding their positions, interests, and motivations. We often listen with rapid-fire responses getting in line ready to launch out of our mouths. Seeking first to understand takes sincerity and a high level of curiosity and appreciation of the other person’s views. Now, while seeking first to understand, then to be understood is one of the most difficult habits, it can pay some of the quickest dividends in filling up the emotional bank account in your relationships. Next time you have a conversation with someone that you’ve had tension with, focus on understanding their perspective, asking good questions, and giving them the airtime to express their views.

Synergy is the power of the whole to be greater than the sum of the parts. We go over strategic synergy, but Stephen’s habit 6 of synergize is a bit different. Synergize means getting the right people involved in a situation and creating the environment to let their energy flow in ways that creates abundant value. Think about your best team experience. There was a palpable energy, a level of creativity, engagement, and hope. The team synergized. To learn more, read the section on high-performing teams.

Sharpening the saw is about renewing yourself and balancing your life between your mental, physical, emotional, social, and spiritual needs.

Putting it all Together

Change is hard. The beauty of the 7 Habits of Highly Effective People is that they are habits. When you find yourself acting opposite of the 7 habits, then remind yourself of them, and get back on the horse. Over time, the seven habits will become second nature, and you’ll realize many of the goals that once seemed so out of reach.

NEXT SECTION: THE 7 SOURCES OF POWER