THE BIG PICTURE ON STRATEGY

Whatever you've accomplished in your life, you had a strategy, made up of the goals you chose and the actions you took to achieve those goals. Think about strategy as a path across time. You have to choose a goal, and then a set of actions. The better you become at choosing the right goals and a strong set of actions to achieve those goals, the better your strategies. 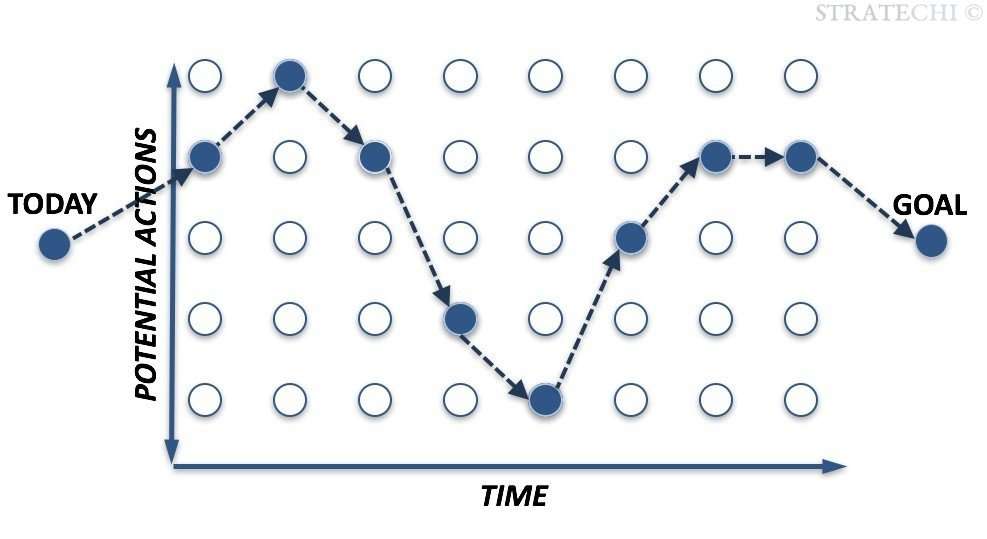 THE SECRET TO GROWTH IS TO FOCUS ON THE RIGHT GOAL...CUSTOMER VALUE

In the U.S. alone, there are 100,000+ businesses with $20+ million in annual revenue. Every one of them was born from nothing but an idea. They grew through strong strategy and execution. And, here is a big secret, most of them didn't focus on the goal of "revenue and profit growth". Every company wants to grow, but the ones that grow don't focus on growth alone.

Growth is the output of loyal customers and new customers. The way to create loyalty and new customers is to drive customer value better than competitors, in a financially superior way, which is at the heart of every business success story.

Business strategy is about choosing the right ambitious, yet achievable goals across every dimension of a business model and then focusing the organization to execute the optimal set of actions to achieve those goals.

We'll dig deeper into the business model and how it works, but the big picture is the purpose of the organization is to efficiently and effectively develop and deliver the value proposition and go-to-market to fulfill the needs of the target customers better than competitors all for the purpose of achieving the mission.

You typically solve the goals and actions from the top of the business model down. You start with a compelling and inspiring mission. You move on to crystallizing and understanding the target markets, customers, and geographies the business will focus on winning in. Next, you figure out the differentiated value proposition, made up of products, services, and pricing. You then amplify the value proposition with a go-to-market strategy, comprised of sales, marketing, and distribution. Finally, you define how the organization will improve the efficiency and effectiveness in developing and delivering the value proposition and go-to-market strategies. 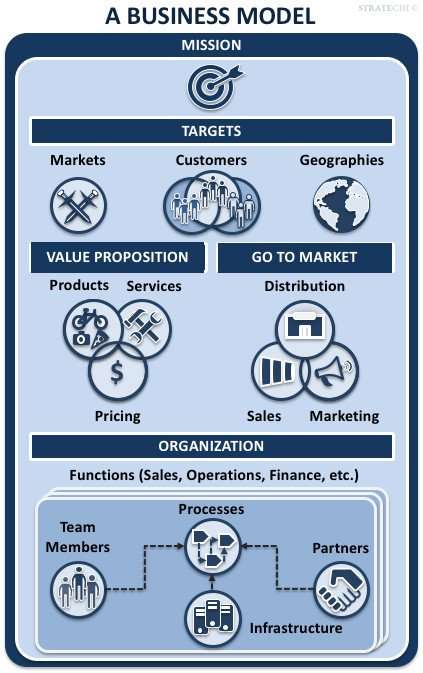 STRATEGY IS EVERYWHERE, SO YOU BETTER BE COORDINATED

If you want a company to grow, you have to collectively figure out the best goals and actions for the organization to execute tomorrow, the next day, the next month, and the next year.

One of the challenges with strategy is that there are so many different types of strategy. The list is long, and companies typically create these strategies in isolation or in the wrong sequence. Inevitably, they are not coordinated and aligned, creating complexity and inefficiency. It is like trying to design a car by independently designing the brakes, chassis, drivetrain, and electronics. In the end, the car won't work.

Strong strategic planning coordinates and aligns the goals and actions across all the organizational functions, and is one of the most effective ways to improve organizational productivity.

Take a look below at the myriad of strategies across a business model. How does your company develop all of them? Are they coordinated and aligned? 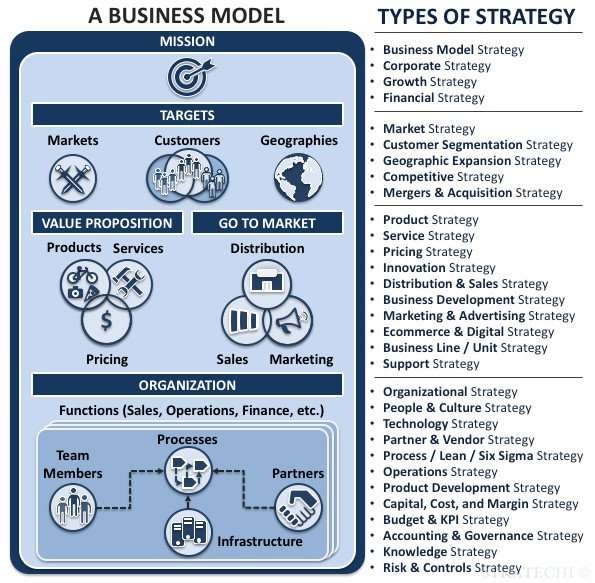 Let's go over the case study below, to drive this point across that growth and success comes down to strategies with the right goals and actions.

THE TALE OF TWO COMPANIES AND THEIR STRATEGIC FOCUS

On March 1, 1962, a retailer was born. In 1974 the Chairman of the retailer proclaimed, “We believe that the concept of low-margin retailing, especially as we have been practicing it, will be around for a long time.” Within 15 years, the retailer skyrocketed to $10 billion in sales, becoming the second largest retailer in the U.S., only behind Sears. It quickly became the largest private sector recruiter of college graduates and was the envy of top students given its world-class management training program.

This retailer sounds a lot like Walmart, but it isn’t. The retailer just described is Kmart, which defined and dominated the low-price discount concept for 20 years, opening hundreds of stores with sales climaxing in 1992 at $38 billion, the same year Walmart finally passed Kmart in annual sales on its way to becoming the largest company in the world with almost $500 billion in annual sales.

On July 2, 1962, Sam Walton opened the first Walmart a mere four months after the first Kmart was opened. It is fascinating that Kmart and Walmart were born at the same time, in the same market, with fairly similar concepts, but over the course of their 50+ year lives, Walmart would become the largest company in the world, while Kmart would become a faint shadow of its former self.  The question is “why?”

Strategy is simply the goals we choose and the actions we take to achieve those goals. Part of Sam Walton's genius is his original mission for Walmart, which was "to give ordinary folk the chance to buy the same things as rich people." Sam focused on driving better customer value than competitors, rather than Kmart's focus on growth, codified in their mission in the 1970s, which was to achieve $12 billion in sales by 1980.

Where hundreds of competitors failed, Walmart triumphed, because of its strategies, decisions, goals, and actions guided by its mission of "giving ordinary folk the chance to buy the same things as rich people." This mission was driven down every dimension of Walmart's cost structure. And, the cost savings was extended to their customers in the form of lower prices. 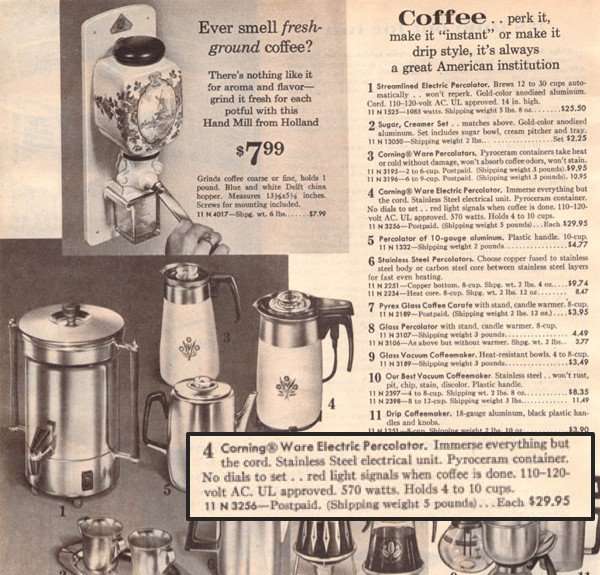 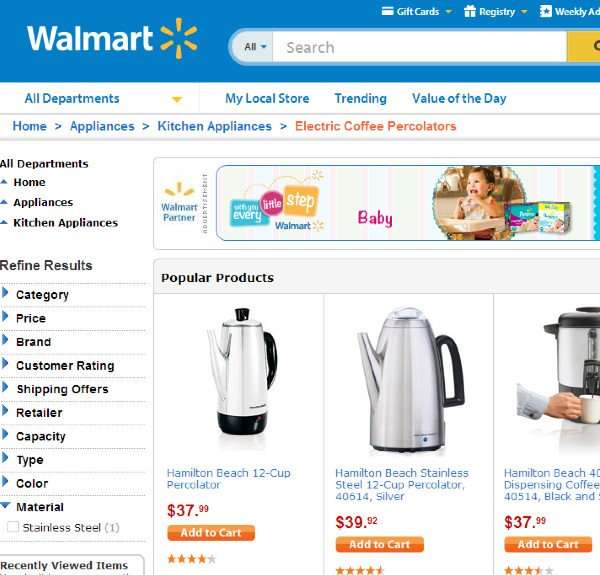 Check out #4 on the Sears ad for a Corningware Electric Percolator for $29.95. Given inflation, the price of that percolator would have been $232 in today’s dollars! Well, today you can get a nice Hamilton Beach coffee percolator at an everyday low Walmart price of $37.99, which in 1962 dollars is just $4.90. In 2017, you could buy 6 coffee percolators for the 1962 price of 1 coffee percolator!

Now, there are a lot of reasons why the inflation-adjusted price of many products is much lower than they were in 1962, including overseas manufacturing, value engineering, automation, transportation efficiencies, scale economics, etc. But, it can be argued that the single largest driver is Walmart and the millions of employees of Walmart, who over the past 50 years have made millions of strategic sub-goals, which has led to trillions of decisions and actions all for the purpose of giving the ordinary folks the chance to buy the same thing as rich people. 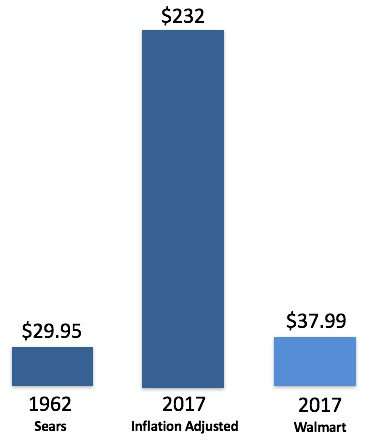 Throughout Stratechi, you'll see the Customer Value Wedge, because it works. Walmart is a simple strategy story replicated by most successful companies. The story is one of growing the customer value wedge by improving the value proposition and customer benefits, while driving down the cost structure and pricing, improving the overall customer value. 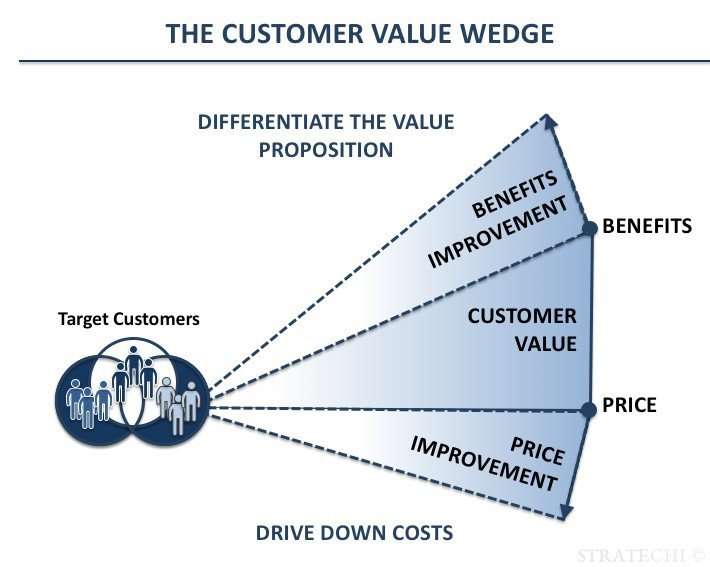 The Payoff of Great Strategy

With the right focus, strategy isn't complicated. If your organization develops and executes great strategies, your company will grow. The magic with Walmart came down to a simple and inspiring mission focused on customer value. While Walmart now faces new competitors that arguably do a better job at driving customer value, no one can argue that from 1962 to the early 2000s that Walmart drove not only incredible customer value but also shareholder value. Those fortunate enough to purchase $1,650 worth of Walmart stock in 1970, would see it worth $4,000,000+ today.

If you need to develop a strategy I encourage you to read developing a strategy or set up some time with me to start figuring it out. 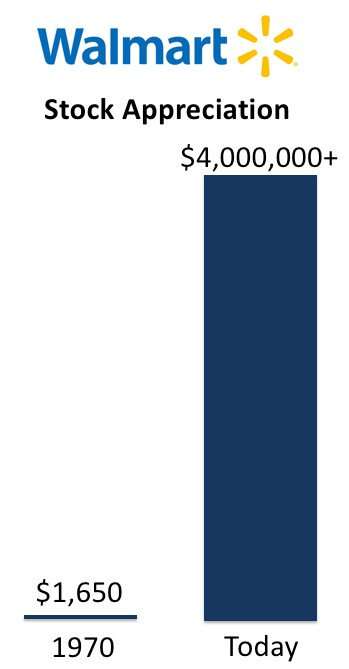 If you found this content helpful, click here to download the 18-page Business Model PowerPoint Template to get you started on developing your winning business model.
NEXT SECTION: BUSINESS MODELS