“Life is a school of probability”

We live in a probabilistic world, where randomness isn’t as random as we think, and nothing is really black or white. Yet, I constantly see managers who are “binary” thinkers, constantly framing situations into a stark duality of one absolute or another. I can always tell a “binary” thinker because they assert their absolutism thinking through comments such as “none of our customers would like that product” and “the competition will never do that.” Binary thinkers love words like never, always, none, everyone, no one, and all. Words that “never” actually happen in the real world. The fact of the matter is a lot of strategic leadership is about stacking the “odds” in your favor, increasing the probability of good things happenings, and decreasing the probability of bad things happening. So, if you want to be a strategic leader, you have to open up your mind to the world of probabilities.

Organizations spend a lot more time and energy than you might think about managing probabilities. Probability is the likelihood of something occurring. So, where are all these probabilities strategic leaders need to manage? Well, here are a few of the most important ones, the probability of:

Dice are always the best place to start when thinking about the basics of probabilities. So, when you roll a 6-sided dice, you have a 1 in 6 chance to roll any number from 1 to 6, which is a uniform probability distribution, as displayed in the below chart. The options of 1 through 6 are on the horizontal axis, and the probability of rolling the number is on the vertical access. And, because the odds are the same, 16.67% of rolling any number in a roll, it creates a straight line or uniform distribution.

Conditional probability is when an action will change the probabilities of the next action. To continue the gambling analogy, think about a deck of cards. Let’s say you’re playing blackjack with five of your buddies, and the dealer just shuffled one deck of cards (52 cards). The dealer deals out two cards to everyone and himself, taking 14 cards (seven players, you, your five buddies, and the dealer). Let’s say another six cards get dealt for a total of 20 cards, as people try to make their best hand without busting. Let’s also say, of the 20 cards dealt, not one of them was an ace. Well, then the probability that you’ll get dealt an ace on the next hand goes up dramatically (about 1 in 4). This is an example of conditional probability when the probability of getting an ace changes from the beginning of the game to the end of the game.

Let’s move on to combinatorial probabilities and go back to the dice examples. Since dice represent independent probability, the odds of you rolling at least one six in TWO rolls is equal to the probability that you will not roll a six which is 5/6 X 5/6 = 25/36, and subtracting this from 1, which equals 11/36. Now, let’s say you’re feeling lucky, and you want to calculate your odds of rolling two sixes in a row. The math is pretty simple as you multiply 1/6 X 1/6, to get to 1/36. So, you have a 1 in 36 chance to roll two sixes in a row.

Another way to calculate rolling one six in two roles, or two sixes in a row is to map out all of the different combinations of rolling two dice, which is displayed in the below chart.

Now, that we’ve had a bit of fun with probabilities, let’s get back to the serious stuff. What we’ve been discussing with dice, cards, and roulette, is called classical probability, where the combinations and probabilities of events are discrete and known. There are two other families of probability, including empirical and subjective probability. 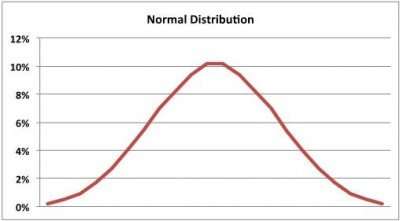 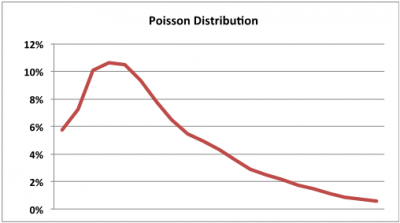 While many people try to manage to averages, it is important to understand the general shape of a histogram or distribution of probability.

At a major retailer, we built pretty extensive histograms on the flow of customers and transactions by the hour and day, so we could properly staff during peak service times. We also did some pretty extensive analysis to understand the probability of demand per SKU per store to minimize out-of-stocks and inventory needs. And, we were always trying to improve the probability that a customer would act on an advertisement, coupon, email, loyalty offer, or digital ad.

Another effective way to assign subjective probabilities is called the Delphi method, which is a structured approach to estimation using subject matter experts. The Delphi method is merely allowing a group of experts to first independently guestimate their forecast, and detail their thinking on key variables and influences. Then a facilitator goes over the anonymous guestimates and thought processes on crucial variables and dynamics, and then another round of guestimates is made, where the subject matter experts refine their forecasts and thinking based on the forecasts and thinking of the other subject matter experts. A group can repeat this process until they have a consensus on the forecast. The Delphi method has been proven to be surprisingly accurate.

Prediction markets are another method that has gained traction with the growth of the internet. A prediction market allows people to use “fake” money to bet on or predict what they think a particular value will be sometime in the future. Companies use prediction markets to assess things such as the likelihood of a project finishing before a certain time or sales forecasts for the quarter. The first widely publicized internet-based prediction market was the Hollywood Stock Exchange, which started in the mid-’90s, and allows people to bet, with fake money, on the projected box office receipts of a movie and the success of movie stars. Over the past decade, prediction markets have made inroads as an input into organizations’ decision-making. There are platforms, such as Inkling and Spigit, which allow employees or other stakeholders to essentially bet on their predictions on different events, including the date a project will be complete, the potential success of various marketing campaigns, the end of the quarter sales, the future sales of a particular product, and any other key forecast.

How do you think probabilistically?

First, don’t be a binary thinker and think in absolute terms. If you find yourself using the binary thinker love words of never, always, none, etc., then you have to eliminate those from your vocabulary. And, start thinking through the spectrums of options and probabilities that are the real world. Here are some tips:

There is so much historical data in organizations, and by simply framing some of this data in simple histograms, you can start to understand the probabilities that are important for your business. You can build a histogram on just about anything, including employee or customer attrition by month, average order size, call volume, or web traffic by day of the week. When you make a histogram, get the buckets correct. So, for average order size are the buckets $10 ($10-20, $21-30) or $50 ($50-100, $101-150). Also, look into the variance of the data. While there are averages, what is the variance of all of the numbers that make up the average? Histograms are a great way to start seeing the world around you in probabilities.

Seriously, my first statistics course changed my life. I started to see the world through such a different lens enabling me to understand so much more about the world. Go on to KhanAcademy.com or OpenCulture.com, and take a free statistics class.

Operations teams often use Monte Carlo simulation to optimize their operations, especially when they have different demand curves, machines that produce at different rates, potential defects, constraints, and supply dynamics. The simulation tools allow you to put in different distributions of probabilities for different variables and then simulate the model over thousands to millions of simulated events.

Use Data and Collaboration with Subjective Probabilities

The accuracy of subjective probabilities can be greatly improved, by analyzing historical data, talking through key variables, tapping into the “wisdom of the crowds” with the Delphi method or prediction markets, and providing a feedback loop of actual data versus forecasts by individuals and teams.

Many of the problem solving tools, including hypothesis thinking, root cause analysis, six sigma, and others, are aimed at helping you manage good and bad probabilities. If you want to increase the probability of something, then you have to understand the main drivers of the probability and how to influence or change those drivers positively.