“Quality is never an accident. It is always the result of intelligent effort.”

I first heard about six sigma when I was a young 21-year-old Business Analyst at Mercer Management Consulting. My imagination conjured up six sigma black belts’ karate-chopping problems into a thousand pieces – hayaaaa!!!

During the 1970s, while the Japanese were perfecting lean, in Illinois, Dr. Mikel Harry of Motorola, was applying statistical analysis and tools to manufacturing and quality problems with great success. During the 1980s, Dr. Harry and his colleagues at Motorola formalized many of their techniques into the six sigma methodology, which they systematically applied across Motorola to drive significant improvements in quality and efficiencies.

The term six sigma comes from the goal Motorola established of having “six sigma” quality, which means a defect-free rate of 99.9999998%, which equates to 3.4 defects out of one million products! Jack Welch during his CEO tenure at General Electric drove the successful adoption of six sigma, which also helped spur the significant growth of six sigma across many large and small companies.

You have probably heard about six sigma & DMAIC. You may even have a six sigma green or black belt within the ranks of your organization. One piece of advice with six sigma is don’t go overboard with it. Too many companies rely on six sigma to try and fix almost every strategic problem they have, and while it can improve discrete processes and quality issues, it is not a panacea for all things strategy.

What is six sigma & DMAIC?

Six sigma has many similarities to lean, especially the very structured problem solving approach, disaggregation of problems, standardization, minimization of the variance in processes, and the focus on continuous improvement. Where they differ is six sigma’s heavy reliance on statistical tools, and six sigma’s practitioner model of advocating for people to be trained, certified, and become part of a pool of experts (i.e., yellow, green, and black belts) for six sigma projects. This is in contrast to the lean philosophy that positive change and improvement are everyone’s responsibility. Below summarizes six sigma and DMAIC. 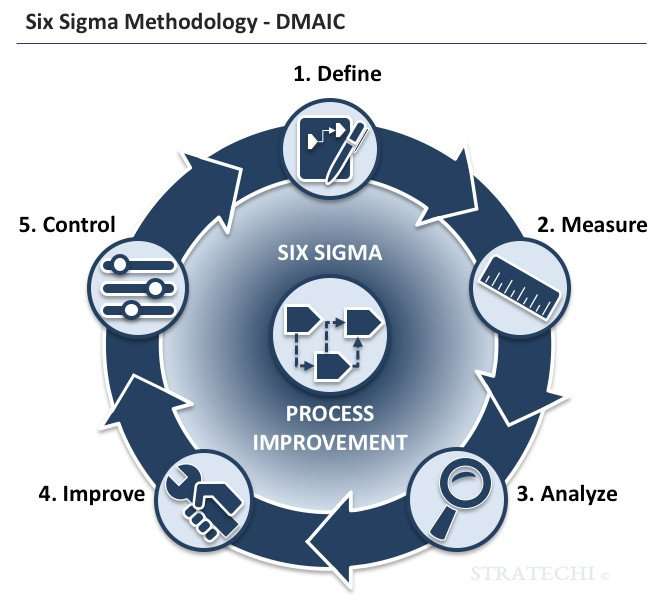 The goal of six sigma is to improve processes by eliminating statistical variance and waste within a process, including the inputs, processing, and outputs. At the heart of the six sigma methodology is DMAIC, which stands for Define, Measure, Analyze, Improve, and Control. DMAIC resembles the scientific method, a typical management consulting project, and the Deming Cycle of PDCA (Plan, Do, Check, Act). Let’s go over DMAIC in a bit more detail, and the tools used in each phase.

Any time you start a six sigma project, you have to define the problem and develop a context. In the define stage, a team creates the problem statement, potential measurable goals, project scope, high-level input and output definition of the process, and context around the customer of the process utilizing the voice of the customer tools.

Once there is an adequate definition and enough context around the problem, then the six sigma methodology focuses on better detailing the process and measuring the process from multiple dimensions to establish a baseline of process performance. Before measuring, you have to further detail the process by mapping it out, potentially using a SIPOC diagram (Supplier, Input, Process, Output, Customer) and understanding the major input variables that drive the output, often using a fishbone diagram. Input variables are defined as “x” variables, while output variables are defined as “y” variables.

You also begin to build hypotheses on value-add versus non-value add variables, cause, and effect between x and y variables, and potential root causes of issues. And, then you establish a baseline of the process by measuring the process. Measurements can include cycle times, inputs, waste, outputs, quality, defects, satisfaction, variance, and resources. Establishing a baseline is critical to truly understand the gap between existing performance and the desired target performance.

Once the process is detailed out, and understood, with a measurement baseline established on performance and many of the y and x variables, then the six sigma methodology focuses on the analyze stage, where the goal is to establish analytic evidence of root causes of variance and performance, correlating the causation of the effects on y from the x variables. The analyze stage necessitates the collection or creation of enough data to drive the statistical analysis. This is where six sigma’s statistical analysis and tools come in, from Pareto analysis, to scatter plots, to regression analysis and standard deviation, to failure mode analysis, along with the basic problem solving tools like the 5 Whys.

Once you’ve gotten to the root causes of the issues and opportunities with a process, the next stage is to improve the process. This is when you create your options for potential improvements and design experiments around these options. The improve stage of DMAIC is about idea generation, brainstorming, innovative and pragmatic solutions, testing and piloting of those solutions, and the final implementation of those solutions. This can often be the longest stage of the six sigma methodology, given it involves creating and deploying solutions.

Once you’ve implemented the solutions, you then want to sustain those improvements. The last stage of the six sigma methodology is the control stage, which entails solidifying the changes by putting in place a continuous measurement plan, tracking measurements vs. the baseline measurements, updating all documentation and tools, solidifying the necessary resources, and training and reinforcing the changes with all of those involved with the process.

Why is six sigma important?

Six Sigma is used in the majority of Fortune 500 companies with varying degrees of investment and success. Beyond the wide adoption of six sigma, the thought process of DMAIC is a strong problem solving approach, and the tools are useful. Though, as a whole six sigma has many critics. The overemphasis on statistical tools and the narrow paradigm of x’s and y’s is said to stifle breakthrough ideas and solutions. Furthermore, the cultural impact of relying on certified “experts” to drive change often makes six sigma a nice idea with challenging results. To combat this criticism, the lean and six sigma methodologies have been combined to form the lean six sigma methodology, taking many of the core principles of lean, especially the 8 forms of waste, and one-piece flow, and combining them with many of the statistical and problem solving tools used in the DMAIC methodology.

How do you implement six sigma?

Whereas lean is more of a broad-based organizational philosophy, six sigma can be effectively compartmentalized in particular six sigma projects. Often, the best way to implement six sigma in an organization is by building a team of six sigma experts to be used more in a SWAT team or tiger team approach, where the team is used on some of the most pressing issues and opportunities in an organization.

Beyond the scope of adoption with six sigma, the typical project and team best practices hold true with six sigma, including empowering the team, assembling the team with the right mix of skills and experience, focusing the team on objective goals, and providing them with the environment, support, and resources necessary to be successful, and holding the team accountable to results.